Article published by Emi Mendoza in the number 190 of the magazine El Pollo Urbano (elpollourbano.es),  June 2019.
Dear readers, I want to share with you the exciting experience I had when visiting an axolotl hatchery.
A fascinating monster
I was delighted when I saw the axolotl through the glass of the fish tank. This cute little monster at first glance looks like a tadpole, because on its back a fin extends from the nape of the neck to the tip of its long tail. Its legs have fine pointed toes, four on the front and five on the back. The locks that protrude on both sides of the head are not decorative, but external gills where they breathe; water penetrates through the mouth and is forced to escape through gill slits where the oxygen is captured. Its face is of a captivating delicacy: the small round eyes and the apparent permanent smile aroused in me a great tenderness. Despite their enormous guts, from time to time, they suddenly rise to the surface at high speed to take a deep breath. The axolotl can come to the surface without problems and even walk out of the water for a short time, since in addition to the gills, it can capture oxygen through the skin, mouth and lungs. In the hatchery, they had axolotls of various colours. Most of them were black or brown with spots, but they also had albinos and others are golden. They are carnivorous and therefore they feed insects and other little animals. They measure from 20 to 30 cm and, as the attendant explained to us, they can live up to 15 years. The name of axolotl comes from the Nahuatl language formed by the words: Xólotl, monster and Atl, water, and it means "water monster".

The secret of eternal youth
The axolotl is identified with the species Ambystoma mexicanum. Curiously, it is the only animal in the world that has the ability to reproduce in its larval state without reaching the adult stage. This process of delaying the development of body structures, but maturing its reproductive organs, is known as neoteny and it is due to this phenomenon that axolotls remain young forever. This does not mean that they are immortal, but that they retain their youthful appearance and their ability to live in the water for the rest of their existence. Imagine that during our adolescence, our bodies stop aging and we conserve ourselves for the rest of our lives in full youth. This is more or less, what happens to the Mexican axolotl in which time never seems to pass. Only in exceptional cases, due to stress or prolonged drought, some axolotl specimens can metamorphose to reach their adult phase, becoming Mexican salamanders, but they will no longer be able to return to the water. Based on research, scientists discovered that their permanent youthful appearance is due to thyroid dysfunction that blocks their metamorphosis.
The axolotl in popular culture
Due to its peculiar characteristics, our friendly "little water monster" has been a source of inspiration for many legends, literary works and has even been the protagonist in the cinema on several occasions. The axolotl is part of Aztec mythology, in which it is associated with Xólotl, god of fire and darkness. Julio Cortázar, famous writer, was inspired by this strange creature to write an interesting story where in the end the axolotl-obsessed writer metamorphoses into one of them. Anthropologist Roger Bartra also used axolotl, in his book La Jaula de la Melancolía, as an ironic metaphor for the national identity of our country.
The axolotl was also taken as the basis for the design of one of the strange creatures that are part of the Japanese cartoon series: Pokémon. In the cinema, the Oscar-winning film The Shape of Water is about a humanoid-amphibian creature captured for military scientific research. Although the story states that the creature was found in the Amazon, the characteristic of healing its wounds quickly and its physical appearance are those of a Mexican axolotl.
Visit to Xochimilco lake
We set out to navigate the channels of Xochimilco to get up close to the natural habitat of Axolotl. The walk allowed us to discover the beauty of its chinampas areas, surrounded by exceptional natural landscapes. 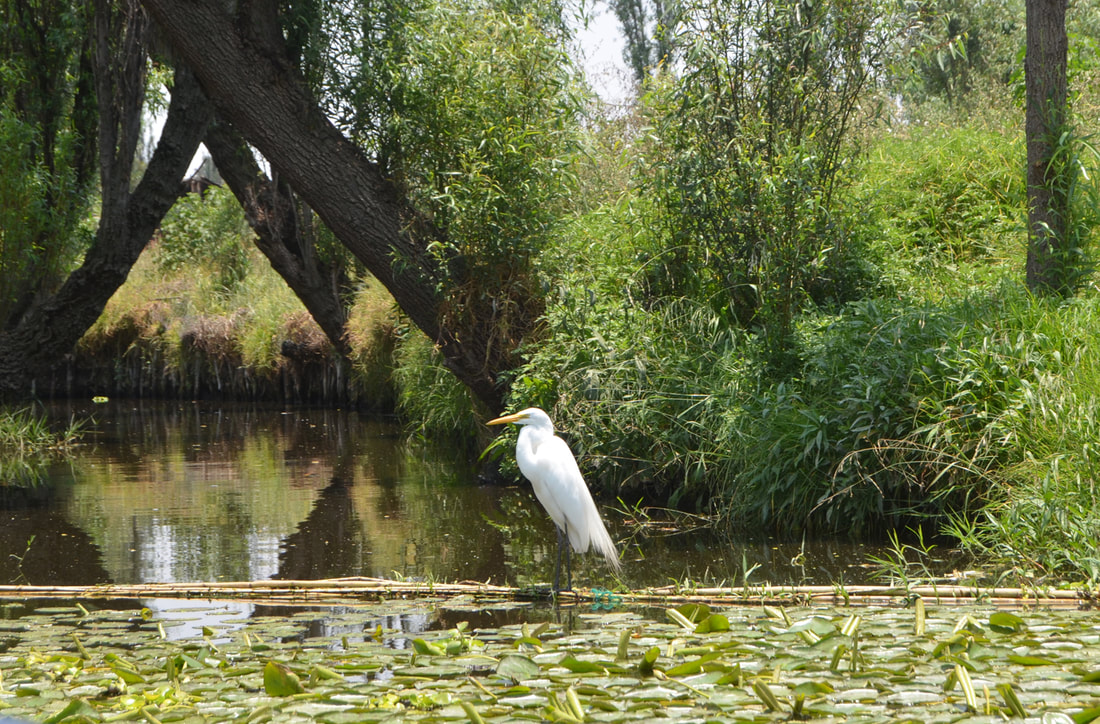 The white heron is one of the species of aerial fauna that make up the lake area. It feeds on axolotls and other fish.

The Axolotl song)
I am proud to tell you that our club of readers and aspiring writers is read even in countries where the Spanish language is not widely used. Miss Gabriela Gorzcyca, one of our staunch readers, read to us in Poland and sent us a suggestion. She invited us to see the video of the Axolotl song on Youtube. I did not know this musical poem dedicated to our Mexican mascot that uses images of our Mexican customs with a bit of irony. Thank you very much Gabriela for your suggestion. I proceed to include it in our article.
The author of this fun song is Joel Veitch, a British entertainer, singer-songwriter and member of the B3ta humor website. The issue of Axolotl was included on his album: “The Ham Machine” digitally published on his website: rathergood.com in 2011 and where he shows many other of his songs with animations. The Axolotl song mentions neoteny, an evolutionary phenomenon typical of Axolotls that when it is lost, the metamorphosis is activated that will transform the axolotl into a salamander and from which it will not be able to return. Being a little strict, the lyrics have an error. He insinuates that transformation is a change of species, but in reality it is a metamorphosis within the same species. Here below the lyrics.
Este sitio utiliza Cookies para funcionar correctamente. Si continuas navegando considero que aceptas su uso